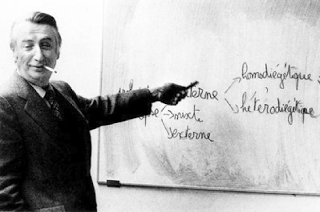 Over at AUFS, Adam Kotsko names the problem with the “recap” as a form of TV criticism. (Incidentally Adam, if you’re ever looking for somewhere to blog about TV…) I think it’s telling that recaps weren’t something I was ever knowingly aware of until I started thinking about this blog. (What Adam refers to as “write-ups” aren’t generally distinguished on the web from recaps.) It’s a form without currency in the British blogosphere – what’s left of it anyway – & I don’t think I’ve ever read any British blogger or web-zine using it. There are reasons for this of course: it seems to have originated from the online outcrops of the American press & to be almost exclusively keyed in to the rhythms of US television, with its seasonal waves of new shows & seasons arriving every autumn. It appears, moreover, as a slightly pointless form in the context of the British press: most of the major newspapers publish reviews of “last night’s telly” in the morning editions (watched on preview DVDs of course).

There has, as it happens, been a critical fuss over the recap in the past year, split, predictably, between those who argue that, as an emergent form, recaps are the only critical game in town & those who accuse them of emasculating critique, deforming it into to data etc etc. (In the latter camp is, equally predictably, most of the “difficult men” responsible for these difficult series: Davids Simon & Chase, the astoundingly irritable & irritating Matthew Weiner.) The bald–men–fighting-over-a-comb quality of this tussle invites a dialectical reading that recognises the problem of the recap without lapsing into nostalgia for a Golden Age of Substantial Criticism that never existed*.

There are some obvious points to make. One: the recap only works for narrative-driven “event” television – the kind of thing Adam has called High Quality Cable Drama**. There would be no point leading the reader through what happened on last night’s Man Vs Food Nation. The increasingly fragmented temporality of contemporary TV, derailed by easy recording, confused programming & the presence of a host of simultaneous channels isn’t conducive to the punctual, episodic focus of the recap. To judge by many episode recaps, it’s as if we weren’t all mostly watching TV on lossy or interrupted streams, but ensconced, undistracted, in front of our nice HDTVs as if it were still 2000, everybody, in that spectral, wishfully-thought image of community, glued to the same show. Two: this inbuilt snobbery is accompanied by a bourgeois privileging of psychological narrative over everything else that constitutes the ambient haze of TV, its decomposition into moments and lacunae. “Small movements or gestures… – moments of unlikely energy, reflection, emptying or light” as Ian Penman put it “can affect you way out of proportion to their supposed ‘importance’.” The half-heard 40s ballads & actors’ faces like looming, unseeing planets in Mad Men mean much more to me – & seem to be more important to the show – than the story convolutions of wh/ Phillip Maciak gives a slightly bloated account. Three: I really don’t buy Matt Zoller Seitz’s line about “Writing fast [as] writing on instinct… You have to give up your inhibitions and let your fingertips dance on the keys.” As someone who did three years of a creative writing degree I can confirm that first thought ≠ best thought. Unless the conditions themselves are right the unconscious isn’t going to come to your rescue. Four: “tired” is more or less the right word. As the note of despair in Adam’s penultimate paragraph suggests, it’s structural. Every technology that opens up new potentialities in cultural forms also comes w/ its own new set of blockages – &, indeed, unrealised possibilities. What is the focus on recaps or overnight reviews preventing or obscuring? Well, given that most of the long-form writing on TV is ridiculously boring & point-missing, that’s one outcome. But also: asides, fragments, montages (like Chris Petit’s “Flickers”), unsententious threads of thought, video-essays. Who knows? The congruence of the recap to the rhythms of social media – not merely the demand for insta-reaction but the libidinal static of the notification or bumping-up inbox number – prevents anything other than the hegemonic temporality intruding into criticism, nothing other than a criticism rendered one-dimensional.

*My own preferences in TV criticism past & – to some extent – present is for eccentrics & exceptions. Ian Penman’s TV columns from the 80s (selected in Vital Signs) are a kind of highwater mark, along w/ Raymond Williams’ 70s columns for The Listener (available in an insanely expensive Routledge edition).

**Incidentally, I don’t really buy the narrative, rehearsed by Maciak in the articles above, of a TV “revolution” made possible by the explosion of The Sopranos, as much as I dearly love that show & some of those that took their cue from it (The Wire & Mad Men to name only the obvious). Serial drama that strings narrative threads across seasons: what about Our Friends in the North? Dennis Potter? Twin Peaks? The Rockford Files? Even – god forbid – Dynasty?

House-sitting for my parents for a week, I spent most of my time in the company of Sky+. Unlike most of the time I’ve spent there since moving out, it happened I was in the grip of an horrific cold, so that I could do little except lie around bemoaning my condition to myself – & watching TV.

I want to pile up strenuous verbs – that I gorged, choked, stuffed myself with TV. But the sense even of action, of a willed excess, of grasping sensation never arrived – & not just because of the painkillers & exhaustion haze. The trope still exists of television as the great conduit of the anaesthesia of images: the viewer passive, undiscerning – he reacts the same to Wagner and Ferrero Rocher ads – slumped on his (no doubt too large) sofa, flicking in automatic rhythm; the massed nature of the images cancels out the intimacy or significance of the individual image – indeed, this is built into those images, as in the news shots of anonymous American troops standing around in any given hot dry country, numbed by distance. Time simultaneously distends & fragments itself; the critical faculties are as asleep as his hand trapped under his arse. The poor slob! While I want to critique this image – for the obvious reasons – a little later, I want first to try & distinguish the strange affect – or affectlessness – I’m talking about from this.

What strikes first is the breadth. I remember the excitement of having cable installed in the early 2000s: over a hundred channels – & even the shopping networks possessed novelty. But there was still only a handful of them, a few scraps of genre, I actually watched – Cartoon Network, Nickelodeon in its halcyon days, occasionally UK Gold, and the four terrestrial channels. With first a Virgin Media box & then Sky Plus, we have roughly five hundred channels, including most of the previously unimaginable film channels & even the verboten adult channels, if I could be arsed to look at them. Holding in mind what’s showing when, even in cases where you have specifically determined to watch something on at a set time, The listings mag is hard to parse; scrolling through the seemingly never ending TV Guide is onerous. You find yourself scanning through the mini-guide at the bottom of the screen or randomly changing channels until you alight on something that seems worth watching.

This isn’t quite the same thing as the old saw, “[X number of channels] & nothing to watch”. Nor is it the same as the syndrome Geoff Dyer describes, of checking what’s on the other side to find what you want, not knowing what it is but knowing you’ll know it when you see it. There is, in fact, a fair bit to watch. But it’s spread across such disparate channels, playing at such strange times & in such a staggered way – in the middle of series whose plots you don’t know or formats you can’t grasp (what would someone unacquainted with the codes of daytime television make of Bargain Hunt?) – that it more closely resembles a temporal mist, signal itself as a kind of interference or noise.

Which is where the record button comes in. Taping always used to be an event: I taped midnight art movies or soft porn or the handful of shows I couldn’t bear to miss but wasn’t there to see (Six Feet Under was one of these for a while; so was The Wire years later, during its brief BBC2 stint). You barracked people for changing the channel. Now it requires the same nudge movement with which I might pick my nose. The hazards of this are well-known: stockpiling huge amounts of TV to watch on dazed afternoons with the curtains closed, time slipping away; alternately, recording too much to ever have the time to watch, the recorder becoming a kind of surrogate viewer – well, at least the box has seen it.

Sky Atlantic and Film4 often seem to have been programmed with precisely this facility in mind. The Sopranos & Six Feet Under on at post-2AM, while, during the time when people are actually wake, showing blocks of Blue Bloods. (I’ve yet to meet anyone who actually watches this show & yet this allegedly prestigious channel loves it.) Rivette, Ray (Satyajit & Nicholas), Powell & Pressburger in the middle of the day or the crypt of morning – &, at primetime, the umpteenth repeat of a lesser Judd Apatow film or Brit-com (is there anyone now who would actually choose to watch Paul or Blackball?) The viewer collages what they can according to their capabilities of watching, perhaps stopping & returning to actual live TV to catch something in particular (in my case, the astounding negative Dionysianism of Man v. Food, about which I want to say more another time). By contrast, many of the specialist channels repeat the same blocks of programmes for differently timed audiences: Food Network shows the same two episodes of Nigella Express three times a day, in the morning, afternoon & at primetime; Sky Atlantic’s post-midnight programming seems completely random, but they do show the same episodes of their HBO dramas twice a week. Choice, pinioned between conflicting optional modes of viewing, becomes the minimal determinant of an automatic process: I’ll watch this next because it’s something to watch &, well, I’ve got the time. The grand power of the selfish-rational individual – extending from education & health down to washing powder & biscuits – is a function of the technology, of the unavoidable social fact of the broadcast, which is always-already occurring & cannot – unlike pre-satellite TV – be lost.

In Mad Men, as in Delillo, TV is an ambient presence, a tinge to the air leaking the outside into the domestic & working sphere. (Recall how few urban exterior sequences there are in Mad Men: it’s a show of what Adorno called the bourgeois interior’s “ontology of hell”.) It is a continuous signal that bleeds around the edges into the “white noise” of Delillo’s novel – meaningless information, the trance of the signifier; time pools & courses but it doesn’t stop flowing. In terms of attention & content it has its ups & downs – both the pointed broadcasts from Vietnam & the Dick Cavett Show – but these exist neither as abundances nor scarcities; TV simply is. It is still to some extent caught up in the irreversible time of 20th-century moving-image, a form of time it shared with Fordist production. By contrast, Sky Plus produces a strange simultaneous sense of profusion & starvation. In the quiet safety of the home there’s so much to watch in the atemporal moment of watching. But turn on the TV & try to find something to watch & you’ll have a hard time.